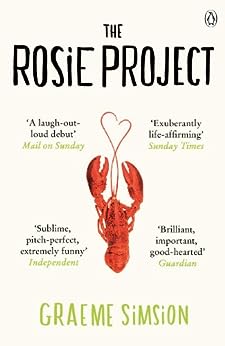 Love isn’t an exact science – but no one told Don Tillman. A thirty-nine-year-old geneticist, Don’s never had a second date. So he devises the Wife Project, a scientific test to find the perfect partner. Enter Rosie – ‘the world’s most incompatible woman’ – throwing Don’s safe, ordered life into chaos. But what is this unsettling, alien emotion he’s feeling?

I didn’t know what to expect when I first started reading this book but I was pleasantly surprised by the quirky characters and crisp writing style. Don is utterly bizarre but also charming in his own way and I immediately warmed to his character. I particularly liked the contrast of Rosie, relatively normal when compared to Don, and her ability to dilute the strange settings they sometimes found themselves in during “The Father Project”. The other minor character, Gene, offered a lot to the story in terms of the science and logic behind both projects and the mechanics of Don’s mindset which, without giving too much away, I thought was key towards the end.

Particularly notable throughout the book are the very witty scenarios, misunderstandings and quirks in Don’s life such as lobster Tuesdays and the hilariously described cocktail incident. These flaws make for a very vivid and fun personality that the reader cannot help but love. By building the complex wife questionnaire we immediately understand and admire Don’s simple and straightforward thinking and this is later repeated in a more elaborate form with “The Father Project”. The author develops several key themes here and expands on the familiar notion of the difficulty in finding a suitable partner and the fact that quite often opposites attract even though we may not in be control of it.

I thoroughly enjoyed this book even though it doesn’t reflect my usual choice. It was enjoyable and unlike many similar reads I found myself laughing out loud several times and keen to discover the mind of Don Tillman. However, the slow pace and abrupt ending may not suit other readers, an important aspect to consider when deciding to pick up this book.

6 thoughts on “Book review: The Rosie Project by Graeme Simsion”