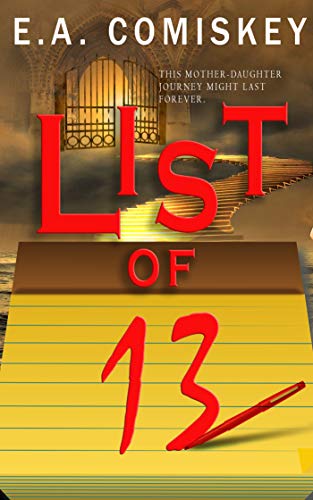 If Jim C. Hines wrote about Gilmore Girls taking a journey through the underworld, it might be a little something like A LIST OF 13.
Death sucks, but there’s good beer in Purgatory.
Alice and her adult daughter, Claire, created a “bucket list” of thirteen experiences they would seek out before Alice died from cancer. They never expected to die in a plane crash attempting to cross off number three. Now, mother and daughter are stuck in the underworld, unable to move on to their ultimate destiny until they finish the list, but finding an Irish Pub near the Fields of Asphodel, or swimming naked in the ocean while being pursued by bloodthirsty Aztecs and a smitten Egyptian god is as hard as it sounds. When everything they ever thought they knew is challenged, will faith be enough to carry them through?
A LIST OF 13 moves between the time after Alice’s death and the time before, allowing the reader to explore the way her relationships evolve and intertwine throughout her life and beyond.

This was a light and fun book which I read in only a few sittings. I enjoyed following Claire and Alice on their adventures in the Underworld as they completed their list of 13 experiences they would like to pursue. Both characters were likable and unique despite their differences. Their relationship, although often strained, really developed in marvellous ways and I was happy to see that they managed to put aside their differences and past mistakes in order to focus and conquer the challenges they faced in the Underworld. Rory’s involvement was also gratifying, especially during the difficult stages in the Underworld where he supported his wife and daughter from afar.

The small details linked to each part of the Underworld made for a very vivid and striking setting. The mythological elements of the book were well integrated into the story line and the plot developed with a steady pace and without too much focus on the mythology but rather a greater emphasis on Claire and Alice’s journey. However, the story jumped a lot between the past and present and it was sometimes difficult to follow the time jumps and points of view. Despite this small shortcoming, the execution of the writing and character development was still excellent.

Overall, this book offers something for everyone, whether you love the thrill of an adventure, prefer to delve into the challenges of a mother-daughter relationship or even enjoy a mix of fantasy and mythology.

List of 13 is soon to be published on 16th December!

Many thanks to the author, E.A. Comiskey, for providing a free advanced reader’s copy in exchange for my honest review.