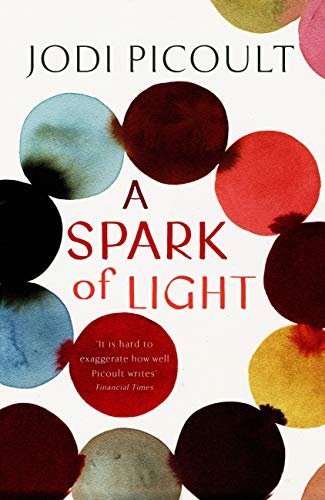 Title: A Spark of Light

The warm fall day starts like any other at the Center—a women’s reproductive health services clinic—its staff offering care to anyone who passes through its doors. Then, in late morning, a desperate and distraught gunman bursts in and opens fire, taking all inside hostage.
After rushing to the scene, Hugh McElroy, a police hostage negotiator, sets up a perimeter and begins making a plan to communicate with the gunman. As his phone vibrates with incoming text messages he glances at it and, to his horror, finds out that his fifteen-year-old daughter, Wren, is inside the clinic.
But Wren is not alone. She will share the next and tensest few hours of her young life with a cast of unforgettable characters: A nurse who calms her own panic in order save the life of a wounded woman. A doctor who does his work not in spite of his faith but because of it, and who will find that faith tested as never before. A pro-life protester disguised as a patient, who now stands in the cross hairs of the same rage she herself has felt. A young woman who has come to terminate her pregnancy. And the disturbed individual himself, vowing to be heard.

I recently attended one of the events during Jodi Picoult’s book tour where she spoke about this book with a lot of passion and I understandingly rushed home and immediately started reading my signed copy. It has taken me a significantly long time since finishing A Spark of Light to put my thoughts together. As with any other Picoult book, the undoubtedly controversial topic and multifaceted characters provoke a mixture of emotions which are often hard-hitting and too complex to put into words. This is by far my favourite aspect of her writing and this novel definitely did not disappoint in this regard. I was especially impressed with her ability to explore abortion through the eyes of several characters who each have completely different views. The great detail in her research shines on every page as small but very significant facts on abortion and the opportunity to seek reproductive care are revealed. Some of the statistics are astounding and really help to understand each character’s position on this complicated topic.

On a more negative note, I have to express my disapproval of the structure which I don’t think benefited the plot or character development. A Spark of Light is written in reverse chronological order to explain how and why everyone arrives at the clinic on the day of the hostage. During her book tour, Jodi disclosed that she had been waiting for the right book to come along so she could use this writing method. Thinking back to all her previous works, I agree with her choice to write this book from all others in reverse order as all the events occur on the same day, however the execution felt weak to me at times because there were simply too many characters involved. I found it more difficult than usual to connect to each character because each chapter jumps from one character to another so we only see snippets of their thoughts. In spite of this, they all had a place and were important to the story line and I wouldn’t be able to discard any of them.

Perhaps I have been too critical of this book; when I read the blurb it immediately jumped up to the top of my TBR list and as soon as I heard Jodi discuss how she wrote it I dropped everything so I could read it. I already knew that it would be extremely difficult to surpass Small Great Things, which still remains my favourite book of hers, however I was still hoping to be completely absorbed by the story. Unfortunately I found myself stopping and re-starting again several times and it took me an unusually long time to finish. Nevertheless, the subject matter is intense and the writing still brilliant, just not as slick as her usual. I would highly recommend A Spark of Light to any fans of Jodi Picoult and anyone hoping to read a thought-provoking book. I would also love to hear your thoughts on it and I am especially looking for recommendations of similar style books/authors so please let me know if you can think of any.

11 thoughts on “Book review: A Spark of Light by Jodi Picoult”