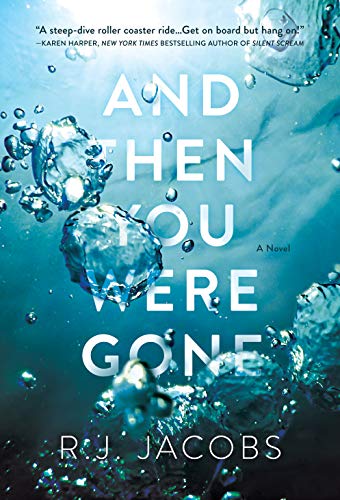 Title: And Then You Were Gone

“After years of learning how to manage her bipolar disorder, Emily Firestone finally has it under control. Even better, her life is coming together: she’s got a great job, her own place, and a boyfriend, Paolo, who adores her. So when Paolo suggests a weekend sailing trip, Emily agrees—wine, water, and the man she loves? What could be better? But when Emily wakes the morning after they set sail, the boat is still adrift…and Paolo is gone.

A strong swimmer, there’s no way Paolo drowned, but Emily is at a loss for any other explanation. Where else could he have gone? And why? As the hours and days pass by, each moment marking Paolo’s disappearance, Emily’s hard-won stability begins to slip.

But when Emily uncovers evidence suggesting Paolo was murdered, the investigation throws her mania into overdrive, even as she becomes a person of interest in her own personal tragedy. To clear her name, Emily must find the truth—but can she hold onto her own sanity in the process?”

An unreliable narrator and hazy circumstances surrounding a disappearance seem to be a great recipe for success so I naturally had high hopes for this book. The first few chapters with Emily and Paolo at the cabin felt natural, the writing was concise and the plot promising. I was impressed with the great level of care and attention the writer put into Emily’s bipolar disorder as it is not an easy topic to discuss, yet it was still handled with a lot of sensitivity and thought. I rushed through the first few chapters as I was impatient to understand what had happened to Paolo and if he was still alive.

Unfortunately, the story line and plot were just to weak for me. I quickly started losing interest as more characters were introduced and the attention shifted to Paolo’s co-workers and research the main motive behind his disappearance. It was also around this point where Emily’s character traits started to emerge and I could not connect with her hastiness or impulsiveness to take dangerous measures so she could uncover what she believed to be a conspiracy. I understand that her interpretation of the events of the night Paolo disappeared were distorted due to her mental illness and praise the author on the way this idea was developed but I think this side of the story line could have approached in a different way while still engaging the reader.

The ending where the secrets were revealed was somewhat of an anticlimax because the author gave many hints throughout the book of the suspect so it was not difficult to assume who it was. Despite the strong beginning, this book had too many flaws for me to fully invest my time in reading it in several sittings. Instead I found myself stopping and starting over the course of a few weeks which happens rarely when I read thrillers. I would recommend it only to those looking for a slower paced thriller and would advise not to trust Emily’s reasoning throughout the book.

And Then You Were Gone is out to buy now!

7 thoughts on “Book review: And Then You Were Gone by R.J. Jacobs”