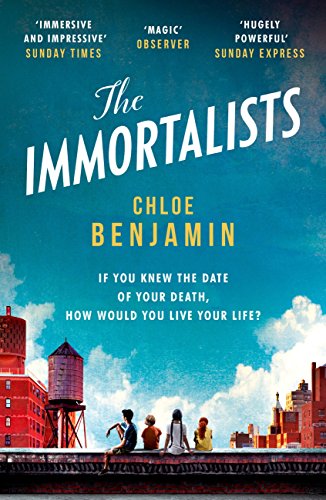 “It’s 1969, and holed up in a grimy tenement building in New York’s Lower East Side is a travelling psychic who claims to be able to tell anyone the date they will die. Four siblings, too young for what they are about to hear, sneak out to hear their fortunes.
We then follow the intertwined paths the siblings take over the course of five decades and, in particular, how they choose to live with the supposed knowledge the fortune-teller gave them that day. This is a story about life, mortality and the choices we make: is it better to live a long and cautious life, or to burn brightly, but for the shortest time?“

The premise of this book left me pondering on so many “what-if” moments. Original and daring, the idea of four young children learning the date of their death and living with this knowledge seemed so fascinating that I immediately wanted to read on and find out how it will affect each one of them. The concept seemed unique and one that could develop in endless ways depending on the choices that each sibling makes and, after discovering how different each one is, I was certain that the plot would follow suit.

Several chapters into the book and I was already starting to doubt the concept and wondering why the author had decided to follow such a rigid path for these diverse characters. Klara and Simon both appeared as feisty and impulsive characters at first yet  the choices they made and the consequences of their actions seemed unexciting. I found it equally difficult to follow Daniel and Varya’s lives which at first appeared somewhat more compelling but turned out to be just as bleak as their siblings’. Fear, confusion and distress were the feelings that possessed their lives and unfortunately that compromised other exciting moments that they missed out on. Knowing when they would die but not how or why absorbed their lives completely, and understandably so, but the plot was ultimately lacking in positive emotions and the depressing nature of their paths weighed down the story line and weakened the concept in originality.

Although this book raised some thought-provoking and critical questions, I found the execution to be poor and the plot dull at times. I was disappointed with some of the decisions the characters made and would have enjoyed more diversity in the way they reacted to finding out when they would die. However, the issues covered were powerful enough for me to appreciate this book for what it is and it left a huge impact on me and my thoughts and reflections for a long time after I had finished it.

9 thoughts on “Book review: The Immortalists by Chloe Benjamin”