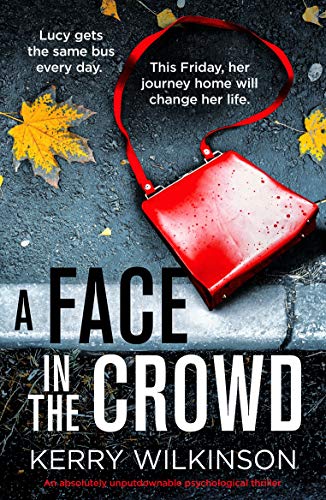 Title: A Face in the Crowd

“Lucy gets the same bus every day. This Friday, her journey home will change her life.
She can barely afford her bus ride, tries to avoid eye contact, and, if she’s really lucky, she gets a seat and reads a chapter of her book.
But it’s a Friday – and the bus is always crammed at the end of the week. Personal space doesn’t exist. She keeps her elbows close and clings to a pole at every juddering stop.
When she gets off, something feels different.
An envelope stuffed with thousands of pounds is in her bag.
Is it the answer to her prayers, or the beginning of a nightmare? “

A Face in the Crowd follows Lucy, an ordinary character struggling to make ends meet as she attempts to pay off debts that her dead ex-boyfriend imposed on her by taking out loans under her name. The first person narrative contributes to an engaging story line and a sympathy for Lucy and her simple life. Unfortunately, as much as I tried, I couldn’t grow to like her because her character was missing the courage and ambition that a main character involved in such a situation is expected to show. After constant complaints and little desire to improve her living situation, there was little else left to her personality. The other minor characters are unnecessary as they weave in and out of the main story line.

In terms of plot, there was much left to be desired as soon as the main reasons for her financial circumstances were revealed. It would be as simple as checking her bank statements each month to avoid getting stuck in her situation but it seemed that she hadn’t learnt this lesson as she continued to make similar mistakes after she found the large sum of money in her purse. Attempts to look for the responsible person in odd ways such as bribing the security man weakened the plot and created a sense of surrealism difficult to relate to, as is the case in almost all psychological thrillers. The sudden change of events, although supported by a strong and unexpected plot twist, did not add up to the previous facts already revealed and instead of answering the main question of who left the money and why, raised more questions that were not addressed in the ending.

Although the plot and characters were missing depth for me, the steady pace and suspense kept me interested. Lucy may not be the most exciting character nor does the original idea behind the plot seem unique but the plot twists were well delivered and mostly unexpected. An unusual choice for the Mystery/Thriller genre, A Face in the Crowd was not what I expected but a good reminder to beware of the people closest to us as they are usually the ones hiding the deepest secrets that could hurt us.

A Face in the Crowd will be out to buy on 6th June!

6 thoughts on “Book review: A Face in the Crowd by Kerry Wilkinson”