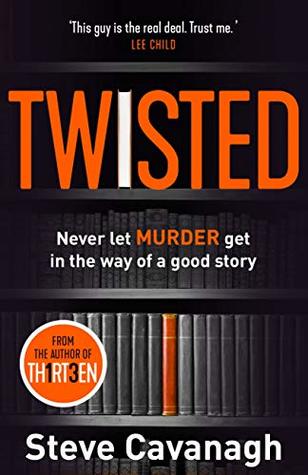 “BEFORE YOU READ THIS BOOK
I WANT YOU TO KNOW THREE THINGS:

After you’ve read this book, you’ll know: the truth is far more twisted…“

This book certainly lives up to its name! There were several moments when I was certain that I had figured out each character’s motive but I ran into another unexpected twist which was a little frustrating at the beginning but more enjoyable as I soon discovered that the rest of the story line follows suit. I rarely have such fun trying to discover the plot twists but it is best to enjoy the rollercoaster ride in Twisted as guessing the twists is close to impossible.

Much to my surprise, Twisted is completely plot-driven and extremely fast-paced unlike many recently published books in the genre which tend to be slow burners with the focus generally on character growth. I struggle to recall the last time I read such an intense thriller which I loved despite not caring much for any of the characters. There are three main characters with chapters written from each character’s POV. At first I was convinced that I had already identified the murderer but as I read on it soon became clear that it wasn’t quite as simple as finding out who the culprit is but rather the rationale leading to their actions in the past and their response upon learning that the other two are aware of the truth. This concept was enough to form a deliciously gripping story line that held my attention until the end.

I highly recommend this thriller to all fans of the genre and I particularly advise anyone hoping to read the book to go in blind and enjoy the ride. Steve Cavanagh has created a masterpiece with Twisted and I suspect that a long time will pass until I discover another cleverly plotted and well written thriller like this one.