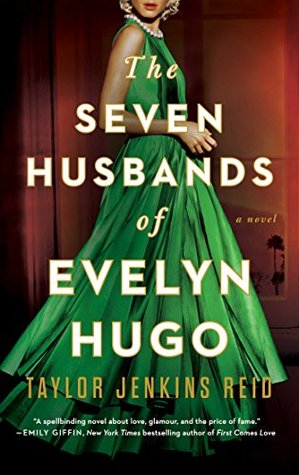 “Aging and reclusive Hollywood movie icon Evelyn Hugo is finally ready to tell the truth about her glamorous and scandalous life. But when she chooses unknown magazine reporter Monique Grant for the job, no one in the journalism community is more astounded than Monique herself. Why her? Why now?
Monique is not exactly on top of the world. Her husband, David, has left her, and her career has stagnated. Regardless of why Evelyn has chosen her to write her biography, Monique is determined to use this opportunity to jumpstart her career.
Summoned to Evelyn’s Upper East Side apartment, Monique listens as Evelyn unfurls her story: from making her way to Los Angeles in the 1950s to her decision to leave show business in the late 80s, and, of course, the seven husbands along the way. As Evelyn’s life unfolds—revealing a ruthless ambition, an unexpected friendship, and a great forbidden love—Monique begins to feel a very a real connection to the actress. But as Evelyn’s story catches up with the present, it becomes clear that her life intersects with Monique’s own in tragic and irreversible ways.“

I must start by saying that I have never read a book like this before and I don’t think that any other similar books exist. It is hard to categorise as there are so many different aspects that merge together to make this book the masterpiece it is. Although it is not quite an autobiography as it involves fictional characters, the narrative stuns with detail and creates the same feeling of proximity as that of an autobiography. Throughout the entire time I felt like I was right next to Monique as she was taking notes of Evelyn’s life and this notion created a very atmospheric feeling which is hard to come by and even more difficult to explain.

Evelyn Hugo has experienced many difficulties and hardships in life and her relationship are the focus of this book. Although “Husbands” is included in the title and the book is separated in sections relating to each of her husbands, I was actually more interested in her relationship with Celia. I really appreciated the divisions but even more so the way in which all the characters were interlinked and continued to reappear in future chapters as it added continuity. Each relationship had its downfalls leading to the continuous row of husbands and ultimately it was the complexity of each relationship which added depth and intensity.

Unfortunately as much as I tried I could not warm to Monique and felt that the chapters focused on her were too plain compared to Evelyn’s. I understand that it was her job to note down Evelyn’s life but I think that Monique’s character could have been developed in other ways to make her bolder and more charismatic. In contrast, Evelyn is perceived as a mesmering, mysterious and exquisite actress with many secrets which are about to be revealed. Characters are often portrayed as either good or bad but Evelyn could not be more of an inbetween character with many wonderful qualities but also a range of immoral and unjust actions and decisions she has taken in her past. Her character is without a doubt the main reason this book seems so different and special and, even though she made many mistakes in the past, the intricacy in her character traits made her a very memorable character and an iconic part of this book.

The Seven Husbands of Evelyn Hugo is an extraordinary book with a great deal of aspects to love, from its multilayered main character to its narrative. A huge part of what makes this book so powerful is the discussion of sensitive topics such as sexuality and violence with a lot of thought and inclusion. This book is certainly original and unlike any other book in the market. For this reason alone I can highly recommend any reader interested in trying out something different to choose this book because I can guarantee that you will not be disappointed.