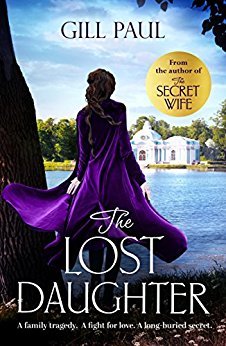 “1918
With the country they once ruled turned against them, the future of Russia’s imperial family hangs in the balance. When middle daughter Maria Romanova captivates two of the guards, it will lead to a fateful choice between right and wrong.

Fifty-five years later . . .
Val rushes to her father’s side when she hears of his troubling end-of-life confession: ‘I didn’t want to kill her.’ As she unravels the secrets behind her mother’s disappearance when she was twelve years old, she finds herself caught up in one of the world’s greatest mysteries.“

When it comes to good quality historical fiction I always look for a bold set of main characters coupled with a powerful and compelling plot. I got this and more in The Lost Daughter and I was hoping that this book would become my favourite historical fiction novel of this year until unfortunately right at the very end due to the abrupt ending.

The storytelling aspect in The Lost Daughter is compelling and intense and takes the reader on a journey from 1918 Russia to 1973 Australia. This book captured my attention right from the beginning as I was transported to the luxurious setting of the Romanov household and was left breezing through the chapters, eager to discover Maria’s fate. Although I didn’t know much about the Romanov family before reading this book, this particular version of the story does not seem too farfetched and I enjoyed seeing another opinion on the possible outcome of the events described in all history books.

Parallel timelines are tricky to develop in historical fiction because quite often the focus ends up being on one of the two timelines which makes for a distorted plot. However, the author handled this effortlessly in this book and I truly felt like equal importance was given to each setting until the end when the two stories merged. I was also interested to see how the characters would meet as I originally could not see much similarity between Maria Romanov’s story and that of Val’s father but it becomes clear at around the halfway point and from then on the story develops into an adventurous and fascinating tale of forgiveness, reminiscence and fate.

Although the writing maintains a steady pace throughout the book, I felt that the ending was a little too rushed and in this case I would have preferred a simple but sealed ending rather than the open ending the author chose. It gives the reader the opportunity to interpret the book in their own way but I did not believe that it suited the prior style of the novel. Despite this small drawback, The Lost Daughter still tells a marvelous story that not only focuses on an important family in history but also takes the reader on an amazing journey around the world with its beautiful writing.

2 thoughts on “Book review: The Lost Daughter by Gill Paul”