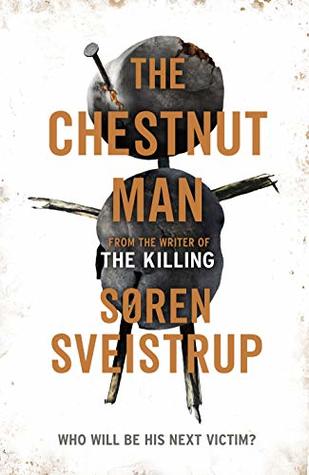 “The police make a terrible discovery in a suburb of Copenhagen. A young woman has been killed and dumped at a playground. One of her hands has been cut off, and above her hangs a small doll made of chestnuts.

Young detective Naia Thulin is assigned the case. Her partner is Mark Hess, a burned-out investigator who’s just been kicked out of Europol’s headquarters in The Hague. They soon discover a mysterious piece of evidence on the chestnut man – evidence connecting it to a girl who went missing a year earlier and is presumed dead, the daughter of politician Rosa Hartung. A man confessed to her murder, and the case is long since solved.

Soon afterwards, another woman is found murdered, along with another chestnut man. Thulin and Hess suspect that there’s a connection between the Hartung case, the murdered women and a killer who is spreading fear throughout the country. But what is it?

Thulin and Hess are racing against the clock, because it’s clear that the murderer is on a mission that is far from over . . .“

“Chestnut Man, do come in.

Chestnut Man, do come in.

Have you any chestnuts that you’ve brought for me today?

Thank you, kindly… won’t you stay?”

Dark, intense, stunning – there simply aren’t enough words to describe the brilliance of this book! I was awake until the small hours of the night and left guessing right until the end.

After a young girl is found ruthlessly murdered with one of her hands cut off and a small chestnut hanging above her, detectives Thulin and Hess are called in to investigate the ghastly killing. The murderer strikes again soon after and this time the next victim is found with both hands cut off, urging the team to realise that they are running against time, dealing with a skilled murderer who is always one step ahead of them.

The characters are impressive and just enough details revealed of their personal lives to allow the reader to form a connection with both Thulin and Hess. Both detectives are portrayed as talented and resilient and still there were several parts during the book where they took me by surprise. There is also a group of other minor characters who are introduced and sometimes reappear based on how the investigation is progressing and the author handles these transitions effortlessly. Although these minor characters are too many to recall, it never feels overwhelming or confusing and the interactions between the detectives and the other characters is always relevant to the crime.

The plot is intense and filled with surprises and twists. There were many opportunities to guess the murderer as little snippets of information were revealed along the course of the investigation. Although these details may not seem relevant at first, each piece of information is ultimately consistent with the profile of the murderer and is revisited in the last chapters where the chestnut man is revealed.

I believe that the success of this book is ultimately related to the fast pace and brilliant writing style. Sveistrup writes with flair but without unnecessary complications or unnatural word choice. It was shocking to find out that this is a debut as based on the writing style I am surprised that he is not a bestselling author.

A powerful plot and range of diverse characters were the winning points in this book for me, along with the fast-paced and never ending action and excellent writing. I was certain that I couldn’t love The Chestnut Man more until I reached the ending and was left in shock when the murderer was unmasked. It surpasses many other books in the Nordic Noir genre and is easily the best Thriller I have read this year.

16 thoughts on “Book review: The Chestnut Man by Søren Sveistrup”