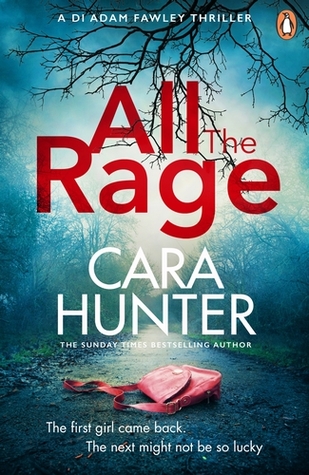 Title: All the Rage

“The first girl came back.The next might not be so lucky.

A teenage girl is found wandering the outskirts of Oxford, dazed and distressed. The story she tells is terrifying. Grabbed off the street, a plastic bag pulled over her face, then driven to an isolated location where she was subjected to what sounds like an assault. Yet she refuses to press charges.

DI Fawley investigates, but there’s little he can do without the girl’s co-operation. Is she hiding something, and if so, what? And why does Fawley keep getting the feeling he’s seen a case like this before?

And then another girl disappears, and Adam no longer has a choice: he has to face up to his past.

Because unless he does, this victim may not be coming back . . .“

The fourth addition to the DI Adam Fawley series did not disappoint. As with its predecessors, it features a wonderful mix of interesting and multidimensional characters and a crime brimming with secrets, ready to be unearthed. Needless to say, I inhaled All the Rage in only a few sittings.

Cara Hunter has already made a name for herself in the Crime genre and with each addition to the series the detectives, in particular Adam Fawley, become more refined and easier to relate to. More details on Fawley’s past are also revealed in this book and I particularly liked the balance between his backstory and the crime. At no point did it feel like the author was forcing Fawley’s past hardships to gain the reader’s empathy but rather attempt to form a natural connection to this central character without removing focus from the main crime. My personal favourites, Somer and Everett, feature heavily in All the Rage and by the end I had formed an even closer connection with both detectives.

When it comes to storytelling and plot development in a crime novel, Cara Hunter is by far one of the best at gaining momentum and always keeping the reader guessing. The minor characters she introduces in each book always feel central to the plot which makes guessing the suspect much harder. The twists are always unexpected and shocking and there were several times in this book where I almost couldn’t believe some of them and had to read back to check if I understood them correctly. In particular, the ending astounded me and left me with an unpleasant feeling. Unfortunately it felt a little unrealistic and farfetched and I could not imagine similar events unfolding in real life but I appreciate the effort and detail she invested in the story line.

Cara Hunter successfully developed the team of investigators and narrated an increasingly complex crime with ease. I was invested in the plot throughout the entire book and was not able to guess the killer or their motive until the very end. Fans of the DI Adam Fawley series will be pleased with this addition to the series and those who haven’t yet read any of the past books will also find themselves constantly guessing.

11 thoughts on “Book review: All the Rage by Cara Hunter”