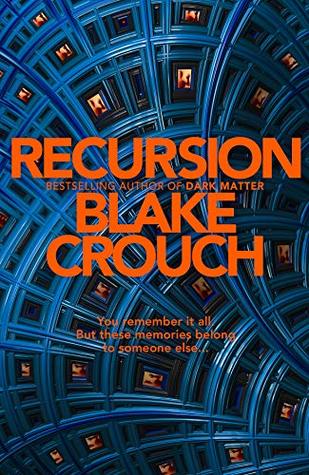 “What if someone could rewrite your entire life?

‘My son has been erased.’

Those are the last words the woman tells Barry Sutton before she leaps from the Manhattan rooftop.

Deeply unnerved, Barry begins to investigate her death only to learn that this wasn’t an isolated case. All across the country, people are waking up to lives different from the ones they fell asleep to. Are they suffering from False Memory Syndrome, a mysterious, new disease that afflicts people with vivid memories of a life they never lived? Or is something far more sinister behind the fracturing of reality all around him?

Miles away, neuroscientist Helena Smith is developing a technology that allows us to preserve our most intense memories and relive them. If she succeeds, anyone will be able to re-experience a first kiss or the birth of a child.

Barry’s search for the truth leads him on an impossible, astonishing journey as he discovers that Helena’s work has yielded a terrifying gift . . .”

“If memory is unreliable, if the past and the present can simply change without warning, then fact and truth will cease to exist. How do we live in a world like that?”

Reading Recursion for me felt like a profound investigation of what it really means to be human and alive and living in the here and now. It posed some of the most ambitious questions that surround humanity and the consequences of our actions. After finishing the first few chapters I was already convinced that I would soon be immersed in an exciting tale of deception and turbulence and could not wait for the exciting journey ahead.

The premise of Recursion is simple enough to captivate the reader right from the start. Imagine a world where your memories never existed and suddenly you are hit with the reality that you are not who you are and you have never met the people you most love. This stark beginning was enough to hold my attention and leave me wanting more. The phenomenon was described as False Memory Syndrome, a rapidly spreading condition which NYPD detective Barry Sutton is investigating. I thoroughly enjoyed following Barry in his quest to expose the secrets which powerful forces behind the syndrome are hiding. Through an unusual set of circumstances Barry meets with Helena Smith, a neuroscientist who invented the device behind the phenomenon. What follows is an extraordinary set of events as Barry and Helena attempt to stop the evil powers who are trying to use the device to bring out the worst in humanity.

The dual timelines worked extremely well at the beginning and supported the plot effectively. In particular, Helena’s POV was pivotal in understanding both why and how she developed the chair which can be used to retrace, delete and alter memories. Several minor characters are introduced and each played an important role in developing the chair and challenging its function as a machine that could change perceptions of time and space. Unfortunately, I became lost in the alternating timelines towards the middle and there were several chapters where I wasn’t sure which storyline I was following and had to read back which detracted from the reading experience. Nevertheless, I was incredibly impressed with the author’s ability to build tension and create multiple worlds through the various timelines.

Ultimately what made Recursion an exceptional read was the moral aspect which the author introduced at the start. I was left wondering what would happen if the chair existed in this world and fell into the wrong hands, as it did in the book, as well as the endless possibilities of rewriting memories and how that would affect humanity. This was my first book by Blake Crouch but my fascination with his ability to build a world so similar yet different to ours has encouraged me to order his previous book, Dark Matter, and if it is anything like Recursion then I am sure that I have discovered a new favourite author.

“We think we’re perceiving the world directly and immediately, but everything we experience is this carefully edited, tape-delayed reconstruction.”