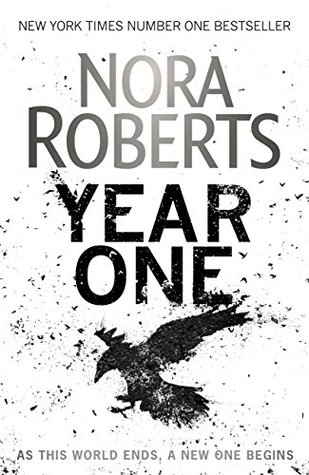 “They call it The Doom – a deadly pandemic that starts on a cold New Year’s Eve in the Scottish countryside. There’s something mysterious about the virus and the way it spreads. As billions fall sick and die, some survivors find themselves invested with strange, unexpected abilities.

Lana, a New York chef, has the power to move things and people with her will. Fred can summon light in the darkness. Jonah, a paramedic, sees snatches of the future in those he touches. Katie gives birth to twins, and suspects that she has brought fresh magic into the world, along with new life.

But The Doom affects people differently. Along with the light, a dark and terrifying magic will also rise. As the remaining authorities round up the immune and the ‘Uncannies’ for testing, Lana, Katie and others flee New York in search of a safe haven. The old world is over, and Year One has begun.“

Year One had been sitting on my shelf for a while and I finally decided to read it in March to try and distract myself from the surreal situation the world was suddenly thrown in. Unfortunately I had completely forgotten the premise of the book and didn’t recall that it revolves around a deadly pandemic until I was into the first chapter.

Luckily the writing style and atmosphere created in the first few chapters were enough to hold my attention and I realised that despite the stark similarities to the current situation in the world, I needed to know more about The Doom. This mysterious disease sweeps across the world with extraordinary speed and a few months into the New Year the world is in a dreamlike state where half the population has been wiped out and countries are run by tenth in line leaders. The knowledge that the pandemic we are experiencing in real life has lower repercussions and is not as deadly was slightly reassuring and actually made me feel safer so perhaps it wasn’t the worst idea to read this book during lockdown.

My struggles with Year One became apparent at the midpoint where too many characters are introduced and it becomes difficult to focus on each one. This diminished any possibility of character development although there were many opportunities. I struggled to remember the relationships and connections between the characters and none of them stood out. However, there was an ongoing sense of community and generosity as the group attempted to rebuild their life in a secluded area and decide on new laws to abide by.

In terms of the fantasy element, the author did an excellent job of incorporating this into the new post-pandemic reality. At first I enjoyed the mysterious nature of the characters’ powers, known as the Uncanny, but I was hoping that more details would be revealed on how and why they are gifted with these powers. Unfortunately even by the end it still wasn’t clear why some characters have these skills and others don’t and how they work exactly. This provides the perfect opportunity to a sequel but I would have preferred a deeper insight into the Uncanny as it seemed overlooked.

Nora Roberts dips into the Fantasy genre with confidence and I truly enjoyed reading a new and different style of books to her usual. Although certain aspects such as the characters and fantasy element could have been addressed better, Year One paves way to a solid start in the series and poses important questions related to the true meaning of humanity and solidarity. Many will enjoy reading this book and I can highly recommend it to anyone considering exploring the genre.

15 thoughts on “Book review: Year One by Nora Roberts”