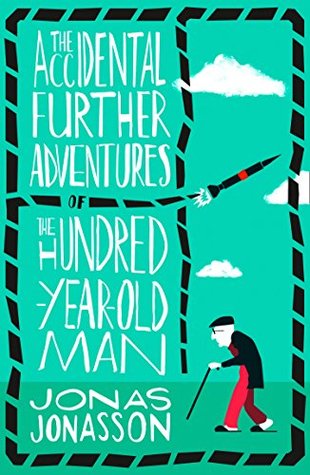 Title: The Accidental Further Adventures of the Hundred-Year-Old Man

“It all begins with a hot air balloon trip and three bottles of champagne. Allan and Julius are ready for some spectacular views, but they’re not expecting to land in the sea and be rescued by a North Korean ship, and they could never have imagined that the captain of the ship would be harbouring a suitcase full of contraband uranium, on a nuclear weapons mission for Kim Jong-un …

Soon Allan and Julius are at the centre of a complex diplomatic crisis involving world figures from the Swedish foreign minister to Angela Merkel and President Trump. Things are about to get very complicated …“

After following Allan Karlsson in The Hundred Year Old Man Who Climbed Out of The Window And Disappeared, I was eager to find out what other  troubles and adventures he would spontaneously throw himself into. He is by far one of the most fascinating and stubborn characters I have had the pleasure of discovering and I was hoping for an equally whimsical and daring set of events in this sequel.

This book starts with a lot of promise as Allan and his companion Julius find themselves facing a tricky dilemma which ultimately leads to a domino effect chain of events. I was reminded of and quickly warmed to the author’s satiric style of humour and was keen to see how the story line develops despite the borderline unrealistic events.

My main concern with this book was that there was too much focus on current politics and although I enjoyed the light banter, it became tiring after the first few puns. I applaud the author for his courage in implementing these delicate aspects but would have preferred just a few jokes about world leaders thrown in instead of constant reminders.

Allan and Julius’ adventure was delightful to follow and their antics were similar to those in the first book. However, it felt like there was something missing and the character development was not as sharp as I would have expected. Nevertheless, I am happy to have read this addition to Allan’s adventures and I would gladly read any other book by this author.

7 thoughts on “Book review: The Accidental Further Adventures of the Hundred-Year-Old Man by Jonas Jonasson”