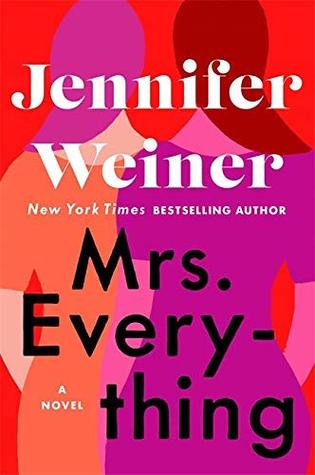 “Jo and Bethie Kaufman were born into a world full of promise.

Growing up in 1950s Detroit, they live in a perfect ‘Dick and Jane’ house, where their roles in the family are clearly defined. Jo is the tomboy, the bookish rebel with a passion to make the world more fair; Bethie is the pretty, feminine good girl, a would-be star who enjoys the power her beauty confers and dreams of a traditional life.

But the truth ends up looking differently than what the girls imagined. Jo and Bethie survive traumas and tragedies. As their lives unfold against the background of free love and Vietnam, Woodstock and Women’s Lib, Bethie becomes an adventure-loving wild child who dives headlong into the counterculture, and is up for anything (except settling down). Meanwhile, Jo becomes a proper young mother in Connecticut, a witness to the changing world instead of a participant. Neither woman inhabits the world she dreams of, or has a life that feels authentic, or brings her joy. Is it too late for the women to finally stake a claim on happily ever after? “

Sisters Jo and Bethie could not be more different. Jo gets by through her early childhood and teenage years with short bursts of rebellion, convinced that her mother is ashamed of her. In contrast Bethie grows up as the favourite daughter until a tragedy turns her world upside down and she confides in her sister thereby changing both their futures. The bond the sisters share grows even deeper as the girls mature and face many difficulties that life throws at them.

The storytelling in Mrs Everything was superb and the plot progression kept me swiftly turning the pages from beginning to end. The author is very skilled at making the reader feel like a part of the story and I truly felt like I followed Jo and Bethie from their reckless and difficult teenage years through to adulthood. I experienced a wide range of emotions as I encountered the obstacles the girls faced, some more frightful than others, and found myself contemplating on many of these emotions after finishing the book.

As far as character growth goes, Jennifer Weiner presented two very believable and realistic characters. It was easy to relate to both Jo and Bethie and the struggles they faced as women who stood out from the rest of society in 1950s Detroit were incredibly well interlaced in their character development. I found it particularly interesting how Jo and Bethie “switched” as they grew and how in adulthood Bethie ultimately followed a more traditional path despite her past.

The pace in Mrs Everything felt somewhat too slow towards the middle of the book where several other characters were introduced. Nevertheless, the intensity of many tough themes such as sexuality, family relationships and the role of women in society was enough to keep me invested until the end and I found myself wishing the book would never end. A gem that is bound to capture the hearts of many readers, Mrs Everything is the perfect representation of what it means to be a woman in this complex world.

13 thoughts on “Book review: Mrs Everything by Jennifer Weiner”