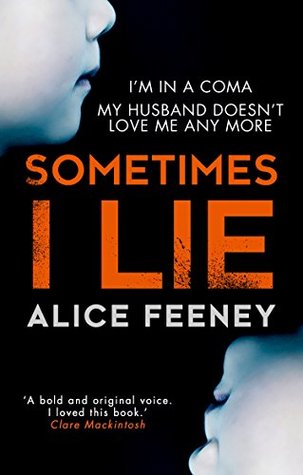 “My name is Amber Reynolds. There are three things you should know about me:
1. I’m in a coma.
2. My husband doesn’t love me anymore.
3. Sometimes I lie.

Amber wakes up in a hospital. She can’t move. She can’t speak. She can’t open her eyes. She can hear everyone around her, but they have no idea. Amber doesn’t remember what happened, but she has a suspicion her husband had something to do with it. Alternating between her paralyzed present, the week before her accident, and a series of childhood diaries from twenty years ago, this brilliant psychological thriller asks: Is something really a lie if you believe it’s the truth? “

Sometimes I Lie tests the boundaries of what is real and what isn’t through the powerful voice of Amber, a victim who recently woke up from a coma but cannot communicate. Stuck in limbo without being able to speak, Amber tries to trace her steps and understand whose fault it is that she is in a coma. It had me questioning if Amber was really the victim and if some of the parts were segments of her imagination or did happen. Although I am not usually a fan of the unreliable female main character trope, the author developed this so skillfully that I found myself enjoying the uncertainty and trying to understand her intentions.

As the plot progresses several other characters are introduced, all part of Amber’s life and therefore possibly capable of harming her and putting her into a coma. None of the characters were portrayed as likable or reliable, another aspect which I usually would not like but worked well in this book, and I questioned their purpose several times. The relationship she has with both her husband and sister is complex and a lot of the interactions were either in diary format or happened in the hospital room through Amber’s point of view, encouraging the reader to take a neutral position and treat each character as a possible suspect.

The plot was filled with twists and turns and never stopped to give the reader a break. Some of the twists I had already guessed but there were several which shocked me and made me see the characters in a different light only to deliver another mind blowing twist soon after. I could already see a big twist coming several chapters before the end but was left confused, almost as if I had missed a huge piece of the puzzle. Needless to say, the ending leaves a lot to interpretation and I would have preferred a neat closed ending with all lose ends tied as I think it suits the story more.

If you are seeking a rollercoaster of a read, Sometimes I Lie may be just the book for you. The exciting plot and dark premise of the main character’s situation were enough to hold my attention. Although the ending left me feeling a little disappointed, the preceding twists were sharp and had me turning the pages. I would recommend this book to all Thriller fans and am already looking forward to reading more by this author.

10 thoughts on “Book review: Sometimes I Lie by Alice Feeney”