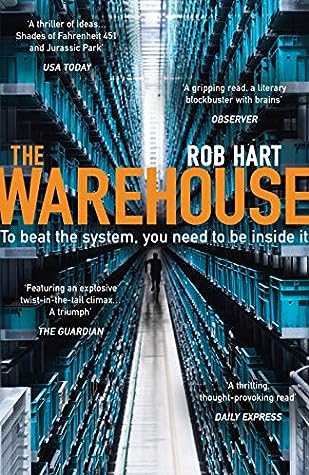 “Gun violence, climate change and unemployment have ravaged the United States beyond recognition.

Amid the wreckage, an online retail giant named Cloud reigns supreme. Cloud brands itself not just as an online storefront, but as a global saviour. Yet beneath the sunny exterior lurks something far more sinister.

Paxton never thought he’d be working Security for the company that ruined his life, much less that he’d be moving into one of their sprawling live-work facilities. But compared to what’s left outside, perhaps Cloud isn’t so bad. Better still, through his work he meets Zinnia, who fills him with hope for their shared future.

Except that Zinnia is not what she seems. And Paxton, with his all-access security credentials, might just be her meal ticket. As Paxton and Zinnia’s agendas place them on a collision course, they’re about to learn just how far the Cloud will go to make the world a better place.
To beat the system, you have to be inside it. “

After many riots and protests in the US, Cloud is built as a way to facilitate easy access to everyday items to an entire nation. Life outside Cloud can be cruel to a normal individual with rising unbearable temperatures and thirst for jobs but life inside Cloud provides opportunities and basic needs so the competition for a job there is understandably fierce. The Warehouse contains an eerily familiar dystopian concept, not too far from current day life, which immediately made it feel relatable and chilling. I was already intrigued by the various directions the plot could take.

As the plot progressed, more details are uncovered about the background of Cloud and its creators. The first person POV by the Cloud creator in blog format created an element of mystery surrounding the company and I constantly felt like he could not be trusted. As the story line progressed and small details were revealed I became even more intrigued by the concept behind Cloud and the workings of such a monopoly. The tension never ceased and it always felt like there was something new to learn about Cloud which gave a spooky thriller-like feel to the story.

The characters were unfortunately not to my liking and I could not connect to any of them. Zinia and Paxton were dull and not engaging enough for such a turbulent plot. There was too much unresolved secrecy and deceit surrounding Zinia and I would have appreciated a more devious antagonist. Paxton was too weak and vulnerable for a main character and his presence almost always felt like it was taking away from the plot instead of adding value.

Although the idea behind The Warehouse is creative and alluring, the execution was weak and there were too many loose ends and questions left unanswered. This could merit an extension or even a possible series to compensate for the somewhat rushed and confusing ending. I would be interested to see how Cloud develops with a new set of resilient and strong-willed characters. This dark Sci-Fi novel highlights the injustices of modern day life and brings to light scenarios that society may believe are almost impossible but are entirely realistic in our future. Fans of dystopia may find a lot to speculate on after reading this book.

4 thoughts on “Book review: The Warehouse by Rob Hart”