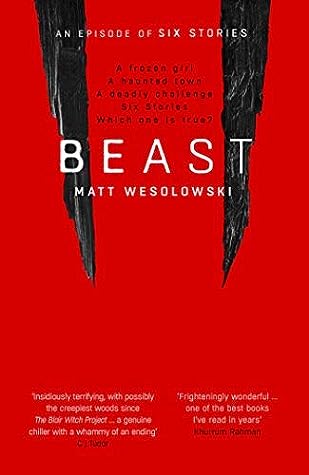 “Elusive online journalist Scott King examines the chilling case of a young vlogger found frozen to death in the legendary local ‘vampire tower’, in another explosive episode of Six Stories…

In the wake of the ‘Beast from the East’ cold snap that ravaged the UK in 2018, a grisly discovery was made in a ruin on the Northumbrian coast. Twenty-four-year-old vlogger, Elizabeth Barton, had been barricaded inside what locals refer to as ‘The Vampire Tower’, where she was later found frozen to death.

Three young men, part of an alleged ‘cult’, were convicted of this terrible crime, which they described as a ‘prank gone wrong’. However, in the small town of Ergarth, questions have been raised about the nature of Elizabeth Barton’s death and whether the three convicted youths were even responsible.

Elusive online journalist Scott King speaks to six witnesses – people who knew both the victim and the three killers – to peer beneath the surface of the case. He uncovers whispers of a shocking online craze that held the young of Ergarth in its thrall and drove them to escalate a series of pranks in the name of internet fame. He hears of an abattoir on the edge of town, which held more than simple slaughter behind its walls, the tragic and chilling legend of the ‘Ergarth Vampire’…

Both a compulsive, taut and terrifying thriller, and a bleak and distressing look at modern society’s desperation for attention, Beast will unveil a darkness from which you may never return…”

After reading Changeling last year, I was convinced that The Six Stories series would quickly become one of my favourites and was eager to find out if Beast would live up to its predecessors. I was pleased that it surpassed by expectations in several aspects and managed to devour it in two sittings.

Scott King is back to tell another mysterious tale on his podcast in the same format as in previous books. Elizabeth Barton is brutally murdered in what appears to be a prank gone wrong. I was immediately taken aback by the revelation of the three murderers however this created an even greater need to unravel the mystery surrounding Elizabeth’s murder. He speaks to six witnesses who knew both the victim and murderers which allowed for brilliant character progression and also added an element of mystery. I never felt that there were too many or too few characters and we gradually discovered more through their interviews, including the type of relationship they had with the victim and murderers.

One of the most defining and unique aspects of the Six Stories series is the eerie atmosphere created in each setting. There are always events of supernatural nature hinted to be the cause of the murder and this is blended into the plot exceptionally well, never feeling too unrealistic but rather leaving the reader with an idea to consider as the plot progresses. This happened almost effortlessly in Beast with the vampire legends and I thoroughly enjoyed these supernatural elements. The setting of Ergarth as a small and sleepy town perfectly juxtaposed the horrific events during Elizabeth’s murder and created an ongoing uncertainty and unease until the end.

As the plot progressed and all interviewees had been introduced, I was finding it difficult to understand why the three suspects convicted of the murder performed the horrific act and was unsure of where the story was heading. However, the ending was a perfect representation of the complex nature of human emotions and actions. It left me speculating a set of moral questions as it touched upon relevant current day topics such as the dangers of social media, complex family relationships and the pressures of growing up. A truly magnificent read and brilliant addition to the Six Stories series, Beast quickly became one of my favourite reads of the year and I cannot wait for the next book in this series.