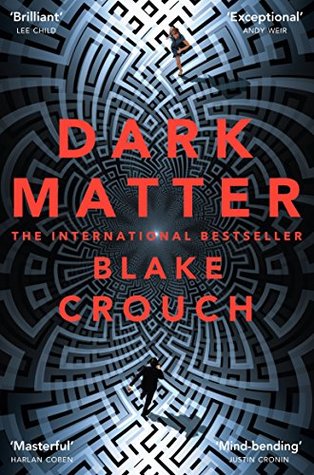 “‘Are you happy in your life?’

Those are the last words Jason Dessen hears before the masked abductor knocks him unconscious.

Before he wakes to find himself strapped to a gurney, surrounded by strangers in hazmat suits.

Before the man he’s never met smiles down at him and says, ‘Welcome back, my friend.’

In this world he’s woken up to, Jason’s life is not the one he knows. His wife is not his wife. His son was never born. And Jason is not an ordinary college physics professor, but a celebrated genius who has achieved something remarkable. Something impossible.

Is it this world or the other that’s the dream? And even if the home he remembers is real, how can Jason possibly make it back to the family he loves? The answers lie in a journey more wondrous and horrifying than anything he could’ve imagined – one that will force him to confront the darkest parts of himself even as he battles a terrifying, seemingly unbeatable foe.“

Jason Dessen wakes up after being taken by masked abductors and his life changes drastically as he begins to question who he is and if the home and family he knew really existed. Was he ever just a physics professor or is his research revolutionary, changing the course of human history? Before he knows it he is thrown into a confusing and terrifying race against time as he struggles to battle an unknown enemy. I was immediately captivated by the intense story line and was intrigued to see how the plot would develop.

It is difficult to explore the backbone of Dark Matter without giving too much away as this is the kind of book that readers must go in without any expectations to avoid spoiling too much. Not only is the writing exceptional but the story line included the perfect mix of romance, dystopia  and mystery. I was always kept guessing, eager to find out more about the theory of dark matter and conscious of the villain like characters trying to stand in Jason’s way. There were plenty of surprises along the way as new developments in the plot were introduced and characters’ intentions revealed.

As with Blake Crouch’s other novel, Recursion, there was a lot of confusion as Jason’s journey through time and space progressed and I often had to stop and recall the events in previous chapters as the pace was too fast and the space and time concept too complex. Although I enjoyed the complexity and chaos I would have preferred some more clarity and simple explanations in some of the ideas of parallel universes and I felt that this was lacking at times.

Dark Matter pushes the boundaries of the almost impossible in a brilliant attempt to explore humanity and highlight the existence of other worlds with endless possibilities. I enjoyed the ride despite several moments of confusion and am excited to read any future books by this author. Readers who enjoy deep reflections into humankind and identity will find a lot to love about Dark Matter.