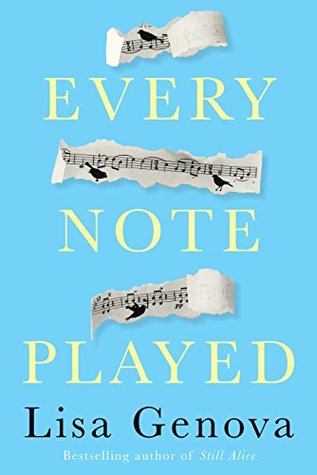 “‘An accomplished concert pianist, Richard has already suffered many losses in his life: the acrimonious divorce from his ex-wife, Karina; the estrangement of his daughter, Grace; and now, a devastating diagnosis. ALS. The relentlessly progressive paralysis of ALS begins in the cruellest way possible – in his hands. As Richard becomes more and more locked inside his body and can no longer play piano or live on his own, Karina steps in as his reluctant caregiver.

Paralysed in a different way, Karina is trapped within a prison of excuses and blame, stuck in an unfulfilling life as an after-school piano teacher, afraid to pursue the path she abandoned as a young woman. As Richard’s muscles, voice and breath fade, the two struggle to reconcile their past before it’s too late.

With a strong musical sensibility and the staggering insight of Jojo Moyes’ Me Before You, Lisa Genova has delivered a masterful exploration of what it means to find yourself within the most shattering of circumstances.“

Sometimes life takes an unexpected course, for the better or worse. Unfortunately for Richard, his diagnosis is a serious one and he already foresees his distressing future as we are introduced to his character in the first chapter. ALS is a debilitating disease and a particularly awful one for Richard, a professional pianist who cannot imagine life without music and his piano.

I was hooked right from the first page although I had my reservations about how the author would navigate the complexities surrounding terminal illness and end of life care. My worries soon dissolved as I realised that Lisa Genova has a particular way with words. Her carefully chosen vocabulary was just right for this story as she didn’t overload the plot with too much medical language but successfully explored the illness from both Richard’s point of view as well as those around him in an expressive and coherent manner. There were elements of sarcasm scattered in however this was done in a tasteful way to show Richard’s coping mechanism with his sudden and painful diagnosis. I applaud the author for the way she handled this sensitive topic in a way many others would be unable to.

Character development is key in Every Note Played and I was interested to hear the viewpoints of Richard’s ex-wife, Karina, and his daughter, Grace. Although Karina almost immediately stepped into the role of Richard’s carer, Grace was less forgiving of some of her dad’s past actions and the way he treated her mother. This created a series of compelling and at times heartbreaking interactions between the broken family which only further highlighted the hardships of terminal illness and its impact on relationships.

The final few chapters were incredibly hard to read however celebrated Richard’s life in a way I could never have imagined at the start of the book. Each character, including Richard himself, ultimately came to terms with the undeniable outcome in their own way and this incited in me a range of emotions which were difficult to control.

Every Note Played is an emotionally wrecking read however it is an important one as it emphasises how short and fragile life is and how practising forgiveness is sometimes the only way to heal. Although it is a book that some may struggle with, it is one that I will be recommending to many friends and family members as there is a lot to learn and reflect on.

2 thoughts on “Book review: Every Note Played by Lisa Genova”