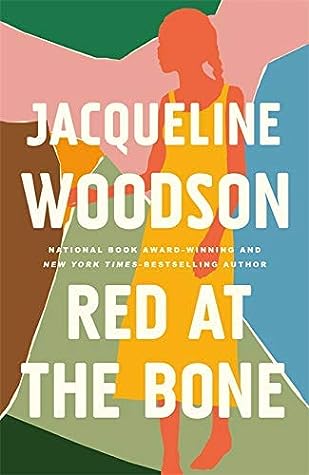 Title: Red at the Bone

“It’s 2001, the evening of sixteen-year-old Melody’s coming of age ceremony in her grandparents’ Brooklyn brownstone. Watched lovingly by her relatives and friends, making her entrance to the music of Prince, she wears a special custom-made dress. But the event is not without poignancy. Sixteen years earlier, that very dress was measured and sewn for a different wearer, Melody’s mother, for her own ceremony – a celebration that ultimately never took place. Unfurling the history of Melody’s parents and grandparents to show how they all arrived at this moment, Woodson considers not just their ambitions and successes but also the costs, the tolls they’ve paid for striving to overcome expectations and escape the pull of history. As it explores sexual desire and identity, ambition, gentrification, education, class and status, and the life-altering facts of parenthood, Red at the Bone most strikingly looks at the ways in which young people must so often make long-lasting decisions about their lives – even before they have begun to figure out who they are and what they want to be. “

Red at the Bone illustrates the struggles of an African American family through reflections of sixteen year old Melody and other members of her family. As Melody is about to walk down the stairs at her coming of age ceremony, she contemplates the events that have led up to this day, giving way to a deeper look into her family’s history. The alternating POVs in the following chapters, each focusing on a particular family member, analyses the difficulties the family faced and highlights many important controversies.

Jacqueline Woodson is a master at telling a powerful and compelling story and this book was no exception. The language is vivid and fierce without being too flowery or overbearing. I could have easily highlighted half the book with quotes to look back on as the writing felt fresh and different. This positively influenced the dynamic change in voices in each chapter as each character had their own way of communicating and it was refreshing to see their own version of the events.

Some of the most critical themes in this book were further empowered by the splendid characterisation of Melody’s mother, father, grandmother and grandfather. Her mother, Iris, had Melody at only sixteen years old, mirroring yet also differentiating between both characters’s paths beautifully. We learn more about how the family dealt with the news or Iris’ pregnancy through their POVs where themes such as race, religion and class are explored with an unusual level of intimacy and harshness which I really admired.

Red at the Bone has the ability to prompt many emotions through the combination of impressive storytelling and realistic and fleshed out characters. I would have preferred to see a deeper look into some of the character’s feelings and decisions but nevertheless I thoroughly enjoyed the book and will be reading many more of Jacqueline Woodson’s books.

14 thoughts on “Book review: Red at the Bone by Jacqueline Woodson”