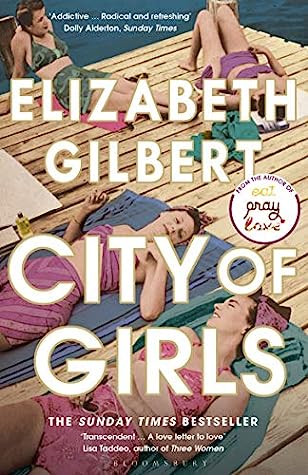 “It is the summer of 1940. Nineteen-year-old Vivian Morris arrives in New York with her suitcase and sewing machine, exiled by her despairing parents. Although her quicksilver talents with a needle and commitment to mastering the perfect hair roll have been deemed insufficient for her to pass into her sophomore year of Vassar, she soon finds gainful employment as the self-appointed seamstress at the Lily Playhouse, her unconventional Aunt Peg’s charmingly disreputable Manhattan revue theatre. There, Vivian quickly becomes the toast of the showgirls, transforming the trash and tinsel only fit for the cheap seats into creations for goddesses.

Exile in New York is no exile at all: here in this strange wartime city of girls, Vivian and her girlfriends mean to be free, to get up to no good, to drink the heady highball of life itself to the last drop. And when the legendary English actress Edna Watson comes to the Lily to star in the company’s most ambitious show ever, Vivian is entranced by the magic that follows in the wake of this true, true star.

But there are hard lessons to be learned, and bitterly regrettable mistakes to be made. Vivian learns that to live the life she wants, she must live many lives, ceaselessly and ingeniously making them new.”

City of Girls is a riveting story following young Vivian Morris as she moves to New York City. Rebellion, growing up and finding oneself are at the forefront of the first half of the book as Vivian faces several challenges after her move to the big city. The plot develops beautifully as Vivian grows up to be a conflicted woman, both mature and somewhat careless, and she tackles a different set of struggles explored in an equally appealing manner.

The setting in City of Girls is simply exquisite and filled with rich elements and vivid details that made it easy to feel fully immersed. 1940s New York as a backdrop tackles a set of complex issues such as the ongoing war and the responsibilities of young women. I adored the first half of the book and the striking descriptions of the theatre, costumes and nightlife.

As the plot progressed and Vivian matured, she questioned some of the decisions which shaped her life and it was interesting to follow her thought process and see major changes in her personality and her views of the world. Certain important people in her life, such as her parents and her aunt, dipped in and out but the focus was primarily on Vivian and I enjoyed getting to know her as a strong main character.

Another unique aspect of City of Girls was the first person narrative letter format. The entire book is a response to a letter Vivian received from someone revealed from early on without any indication of how the characters are connected. This style of writing was innovative and fitted well with the plot progression and character development.

City of Girls has the perfect blend of beautiful writing and interesting story line. Although some parts felt slow and I lost the connection with the characters, it usually quickly picked up with a revelation or turn in the plot. It was a marvelous read and one I will remember for a long time.

10 thoughts on “Book review: City of Girls by Elizabeth Gilbert”