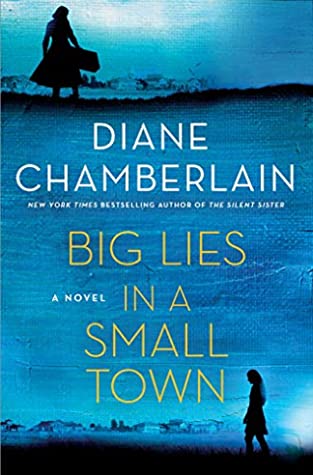 “North Carolina, 2018: Morgan Christopher’s life has been derailed. Taking the fall for a crime she did not commit, she finds herself serving a three-year stint in the North Carolina Women’s Correctional Center. Her dream of a career in art is put on hold—until a mysterious visitor makes her an offer that will see her released immediately. Her assignment: restore an old post office mural in a sleepy southern town. Morgan knows nothing about art restoration, but desperate to leave prison, she accepts. What she finds under the layers of grime is a painting that tells the story of madness, violence, and a conspiracy of small town secrets.

North Carolina, 1940: Anna Dale, an artist from New Jersey, wins a national contest to paint a mural for the post office in Edenton, North Carolina. Alone in the world and desperate for work, she accepts. But what she doesn’t expect is to find herself immersed in a town where prejudices run deep, where people are hiding secrets behind closed doors, and where the price of being different might just end in murder.

What happened to Anna Dale? Are the clues hidden in the decrepit mural? Can Morgan overcome her own demons to discover what exists beneath the layers of lies?”

Told in two timelines and featuring two strong willed female main characters, Big Little Lies explores the endless possibilities one will go to protect the ones they love. It delves into complex topics such as racism, gender bias and mental illness and, as with other books by this author, the motif, in this case the mural, acts as a magnet to bind both timelines and create a space for these characters to connect in a beautifully expressive way.

The dual timelines were a powerful way to narrate both Anna’s and Morgan’s struggles with important life decisions they made, draw similarities to their life paths as well as bring out the differences. The chapters were long enough to transport the reader to each setting but equally not too overbearing to distract from the switching POVs. The storytelling in both timelines was exceptional with elements of mystery added in, such as what happened to Anna and why this mural was in the hands of the influential black artist, Jesse Williams. These questions kept me fully invested until the end.

Fans of Diane Chamberlain may already be aware of her unique ability to create emotional connections through her fleshed out and complex characters and this book was no exception. I instantly empathised with both Anna and Morgan and wished for a positive outcome for them. Although at first it may seem as if the mural is their only bond, both characters have similar traits which the author explored in great detail.

The ending was satisfying and tied up all loose ends, providing the reader with closure which I always value in Historical Fiction books. Unfortunately the pacing seemed too uneven towards the last few chapters but I appreciated the great level of detail on both character’s backstories. Big Lies in a Small Town is a compelling and emotional book that explores a wide range of themes with great care and highlights Diane Chamberlain’s talent for writing. I highly recommend this book to all Historical Fiction lovers and anyone hoping to read a beautifully told story.

8 thoughts on “Book review: Big Lies in a Small Town by Diane Chamberlain”