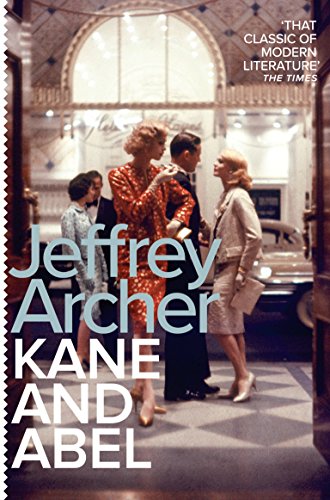 “They had only one thing in common… William Lowell Kane and Abel Rosnovski, one the son of a Boston millionaire, the other a penniless Polish immigrant – two men born on the same day on opposite sides of the world, their paths destined to cross in the ruthless struggle to build a fortune.”

I must admit that I love Jeffrey Archer novels. After finishing The Clifton Chronicles saga my hands were immediately itching to pick up another Jeffrey Archer novel and get lost in the web of mystery and deception he weaves in all his books. I find it so intriguing how he delves into his characters’ minds, decorating each with a unique voice and ultimately creating an original yet plausible scenario that leads to a domino chain of events. I must say that this book was no exception and I even thought that it was his best book to date.

William Kane and Abel Rosnovski are born miles apart and lead completely separate lives until fate brings them together. I immediately took a liking to Abel after following his treacherous journey through Poland, Russia and Turkey and was amazed at the little details that Archer included here to further emphasise the difficulties Abel faced in comparison to William Kane who led a much simpler life. By far the most gripping part of the story is when their paths cross and their strong-willed and powerful personalities clash causing an almost never ending rivalry. Some readers may not enjoy the pace and narrative that follows and I appreciate that it is perhaps too flat depending on taste but I devoured the remaining part of the book in almost one sitting.

On a final note, the ending of this book is so intense with emotion, providing a very satisfactory close to an exhaustive contest, that I almost wanted to immediately start the next book in the series, The Prodigal Daughter. Deciding to leave it for a later stage was perhaps a better idea as I enjoyed reflecting on this marvelous book for several days. Have you read any family sagas with a similar style to Jeffrey Archer’s novels that you can recommend? If you have read this book or any others by this author I would love to hear your thoughts!

3 thoughts on “Book review: Kane and Abel by Jeffrey Archer”