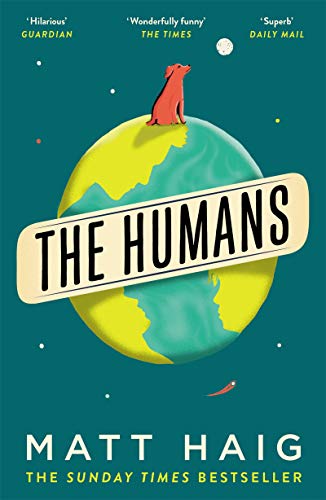 “One wet Friday evening, Professor Andrew Martin of Cambridge University solves the world’s greatest mathematical riddle. Then he disappears.
When he is found walking naked along the motorway, Professor Martin seems different. Besides the lack of clothes, he now finds normal life pointless. His loving wife and teenage son seem repulsive to him. In fact, he hates everyone on the planet. Everyone, that is, except Newton. And he’s a dog.
Can a bit of Debussy and Emily Dickinson keep him from murder? Can the species which invented cheap white wine and peanut butter sandwiches be all that bad? And what is the warm feeling he gets when he looks into his wife’s eyes?“

On the surface The Humans appears to be a witty tale of an alien who is sent to Earth to possess the body of serious Professor Andrew Martin in an attempt to prevent one of the biggest mathematical riddles of being revealed and chasing the future forever. However, a deeper look is enough to understand that this book is really about human nature and a reflection of all the small and big things we may not even realise we do that make us special. Here are some examples that portray the beauty of this book:

“Oh, and let’s not forget the Things They Do to Make Themselves Happy That Actually Make Them Miserable. This is an infinite list. It includes shopping, watching TV, taking the better job, getting the bigger house, writing a semiautobiographical novel, educating their young, making their skin look mildly less old, and harboring a vague desire to believe there might be a meaning to it all.”

“Now, consider this. A human life is on average 80 Earth years or around 30,000 Earth days. Which means they are born, they make some friends, eat a few meals, they get married, or they don’t get married, have a child or two, or not, drink a few thousand glasses of wine, have sexual intercourse a few times, discover a lump somewhere, feel a bit of regret, wonder where all the time went, know they should have done it differently, realise they would have done it the same, and then they die. Into the great black nothing. Out of space. Out of time. The most trivial of trivial zeroes. And that’s it, the full caboodle. All confined to the same mediocre planet.”

The atmosphere and mood changes swiftly as the plot moves from the alien arriving on Earth and trying to understand human nature to slowly getting used to his new family and finally feeling like a human. There are too many funny and special moments to count, from the brave and remarkable scene of the alien saving Gulliver the son and the amusing occasion where he shares peanut butter with Newton the dog. I laughed and nearly cried out in surprise several times while reading this book and enjoyed reflecting on the little quirks that make us human which were so well represented through the eyes of the alien.

The only downfall for me was the ending which felt a little rushed. Although it celebrated human life in its truest form I would have liked to see more on Andrew Martin’s life rather than an overview. Nevertheless, this didn’t devalue the remaining part of the book and I believe was still the best way to end the story line on a positive note. I highly recommend The Humans to everyone as this is not a book that can fit any category but rather one that can be enjoyed by readers of all ages, backgrounds and interests.

6 thoughts on “Book review: The Humans by Matt Haig”