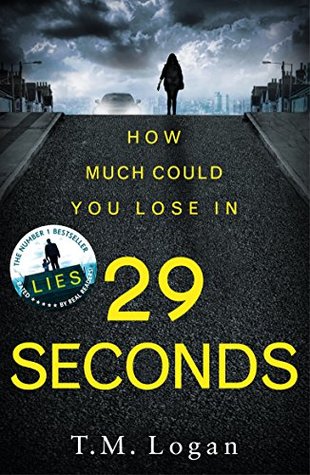 “Give me one name. One person. And I will make them disappear . . .

When Sarah rescues a young girl in trouble, she expects nothing in return. But her act of bravery puts a powerful and dangerous man in her debt. He lives by his own brutal code, and all debts must be repaid – in the only way he knows how.

He offers Sarah a way to solve a desperate situation with her intolerable boss. A once-in-a-lifetime deal that will make all her problems disappear.

No consequences. No comeback. No chance of being found out.

All it takes is a 29 second phone call.

Because everyone has a name to give. Don’t they? “

From the blurb I was expecting a typical thriller where the main character is frantically trying to find a missing person and several other characters hope he stays missing. I was pleasantly surprised to find that the premise of 29 Seconds is much more intricate and involves a range of complex and sensitive themes which were boldly developed.

Sarah is an interesting main character although some of her actions are certainly questionable. Faced with a difficult decision of making one person in her life disappear after witnessing and preventing a possible crime, she weighs up her options carefully and picks the one person who she knows she won’t miss. Her decision making assumes a considerable chunk of the book from which I understood that she was careful and calculating in her actions. However, I was somewhat disappointed that these qualities slowly disappeared and she became uncertain and reckless, a common and overdone trait in main characters of the genre.

The remaining characters in 29 Seconds all played an important role in developing the story line and dipped in and out with intention. In particular, the portrayal of her boss, Alan Hawthorne, was courageous in both motive and execution. It is revealed from the beginning that he has misogynistic tendencies in the work place and I liked how the author didn’t hold back on developing this scandalous side of him.

Several hard-hitting topics, such as sexual harassment, were introduced in a tasteful manner without ever feeling too overwhelming or insensitive. Sarah’s thoughts echo many women who face similar situations and the portrayal of this topic through the main character was expertly done. It also broaches several important and controversial questions about how we react in the work place and the efforts we would undertake to expose injustice.

The pace seemed just right and even though the plot spans a relatively short amount of time, the chain of events develop quickly. The twist in the end was unexpected although it felt a little unbelievable and did not tie in completely with Sarah’s personality. Nevertheless, it seemed fitting and a solid end to her troubles.

29 Seconds is an exciting thriller which managed to capture my attention from the start. The characters and plot worked well in sync and I was positively surprised by the ending. This is a noble addition to T.M. Logan’s books and I highly encourage other fans of the genre to read it.