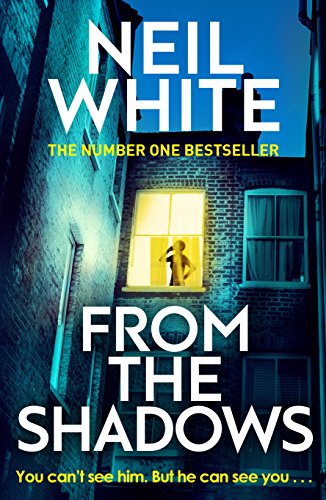 Title: From the Shadows

“He hides in the shadows, watching, waiting, until the time is right . . .
Mary Kendricks, a smart, pretty, twenty-four-year-old teacher, has been brutally murdered and Robert Carter is accused of killing her.
When defence lawyer, Dan Grant inherits Carter’s case only weeks before the trial starts, everyone expects him just to babysit it, but Dan’s not that kind of lawyer. He’ll follow the evidence – wherever it takes him.
But as Dan and his investigator Jayne Brett look into the case, they discover that there is more to it than meets the eye. In order to do their jobs they need to push the limits of the system, even if it means putting themselves in danger.
Together they will get to the truth – whatever the cost . . .”

After having stumbled upon many reviews praising Neil White’s work, I decided to start with the first book in the Dan Grant series on a rainy day when I was looking to get lost into a complex court drama. I must admit that this book had me hooked right from the beginning; the third person point of view of the stalker was striking and mysterious and the murder revealed in the first few chapters showed a lot of promise. Similarly, the introduction of Dan Grant as an up-and-coming criminal defense lawyer keen to support his client and simultaneously win his case was a bold start to what appeared to be an intriguing murder mystery.

It was from this point when I found myself struggling to stay interested in the rest of the story. The writing felt disjointed and strained as the plot jumped from the past to the present and suddenly left behind the mysterious third person narrative of the stalker, something which really attracted me in the beginning. I was also not keen on the intent to establish a love interest for Dan as I felt that his character was bright enough without this added element and the sudden attraction to Jayne with barely any foreshadowing. Most of all, the pace during the middle of the plot was too slow without many developments on the murder case. It often felt like Dan and Jayne were following the same leads with no success which eventually became frustrating.

Unlike the middle of the story line, the ending was completely sudden and significantly more fast-paced as Dan and Jayne worked together on the final lead to solve the mystery and defend the client in court as best as they could. I was especially disappointed to find out who the stalker is because this character felt redundant to the story line from the start. Nevertheless, the strong ending had a huge impact on the plot and storytelling and I have to praise the author on these final tense chapters. From the Shadows may not have been the fast-paced and thrilling read I was seeking but I think that others who are looking for a character-driven court drama may find much to love here.

5 thoughts on “Book review: From the Shadows by Neil White”