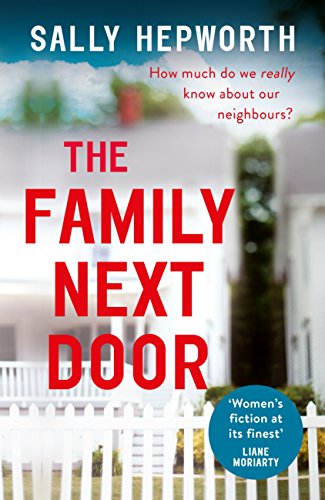 Title: The Family Next Door

The small suburb of Pleasant Court lives up to its name. It’s the kind of place where everyone knows their neighbours, and children play in the street.
Isabelle Heatherington doesn’t fit into this picture of family paradise. Husbandless and childless, she soon catches the attention of three Pleasant Court mothers.
But Ange, Fran and Essie have their own secrets to hide. Like the reason behind Ange’s compulsion to control every aspect of her life. Or why Fran won’t let her sweet, gentle husband near her new baby. Or why, three years ago, Essie took her daughter to the park – and returned home without her.
As their obsession with their new neighbour grows, the secrets of these three women begin to spread – and they’ll soon find out that when you look at something too closely, you see things you never wanted to see.

I feel hesitant posting this review after reading other readers’ thoughts on this book and I think I might be one of the only ones to give it an average rating. This is a quick and engrossing read, similar to other domestic thrillers with confident and headstrong female leads. The story line follows three neighbours from Pleasant Court, a suburb in Australia, who each hide their own secrets, unaware that a huge discovery is about to be made by their new neighbour Isabelle. The pace is steady and secrets are revealed with purpose and in the right doses throughout the book. Despite my initial concerns, the subject matter related to each secret is heavy but unpredictable and very well analysed by the author who delves into each character, narrating their story with close attention to detail.

My main issue with this book is the interaction between the neighbours which I found to be very superficial and gossipy. Some of the themes discussed were dark but this was usually portrayed in the narrative where characters’ thoughts were revealed, unlike the conversations at the suburb which often felt superfluous and repetitive. I understand that perhaps this is also telling of the different ways we hide information from our peers compared to our thoughts when we are alone, but the dialogue left me feeling disappointed and sometimes even irritated. I could not relate to Isabelle or any of the other women and was not impressed by how uninteresting their husbands were portrayed either.

Overall, this book fell a little flat for me and made me question some of the characters’ decisions which I don’t believe was always intended. However, the pace was good enough to draw me into the world of Pleasant Court where relationships are tested and important topics such as parenthood, marriage and mental illness are discussed. It is a quick and entertaining read and perfect for anyone looking for a domestic thriller narrated from a woman’s perspective.

4 thoughts on “Book review: The Family Next Door by Sally Hepworth”