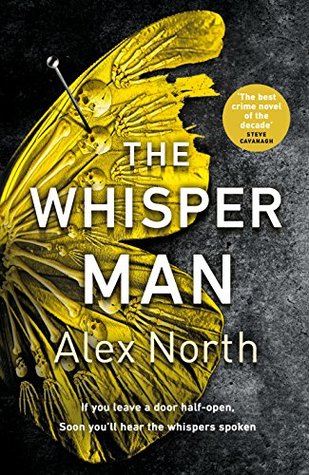 ” If you leave a door half-open, soon you’ll hear the whispers spoken…

Still devastated after the loss of his wife, Tom Kennedy and his young son Jake move to the sleepy village of Featherbank, looking for a fresh start.

But Featherbank has a dark past. Fifteen years ago a twisted serial killer abducted and murdered five young boys. Until he was finally caught, the killer was known as ‘The Whisper Man’.

Of course, an old crime need not trouble Tom and Jake as they try to settle in to their new home. Except that now another boy has gone missing. And then Jake begins acting strangely.

He says he hears a whispering at his window…“

“If you leave a door half open, soon you’ll hear the whispers spoken.
If you play outside alone, soon you won’t be going home.
If your window’s left unlatched, you’ll hear him tapping at the glass.
If you’re lonely, sad, and blue, the Whisper Man will come for you.”

After suffering the tragic loss of his wife, Tom Kennedy decides to start a new life with his son and soon finds the perfect place for their future: Featherbank. Years ago the Whisper Man haunted the lives of its inhabitants and some still remember the pain he caused. Others doubt he ever existed. However, when Jake starts hearing whispers and Tom is certain that there is no one else in the house, reality hits close to home and Tom begins to doubt if he and his son are really safe in their new environment.

The premise of The Whisper Man is intriguing and boasts potential of an electrifying thriller. It comprises the perfect blend of character growth, plot and setting. There were many red herrings and tense moments, creating an eerie feeling that lingered throughout the book. Questions were raised on whether the whole scenario was a hoax or if the Whisper Man had returned and I enjoyed the hints dropped which helped the reader discover the truth.

An important aspect in The Whisper Man, not to be forgotten, is the relationship between father and son which was extremely well portrayed. Mixed emotions such as grief, distress and love are explored as Tom and Jake adjust to their new life. I warmed to both characters and enjoyed following their journey to acceptance and content.

The plot is incredibly well developed with many unexpected twists thrown in at the most tense moments. I ultimately guessed the big reveal correctly but this didn’t hinder the ending as the execution was slick and tied in well with the remaining part of the story.

I thoroughly enjoyed every twist and turn in The Whisper Man. Few thrillers manage to grab my attention from the first chapter but the solid writing, tense atmosphere and likeable characters made this book an exception. I advise all fans of thrillers to consider reading this debut and am certain that they will not be left disappointed.

20 thoughts on “Book review: The Whisper Man by Alex North”